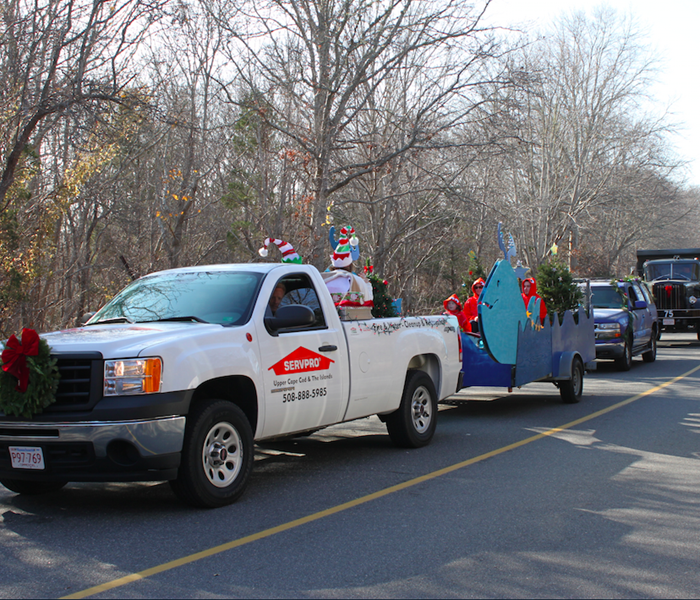 The holidays are one of my favorite times of year and now that we have a granddaughter, they are even more wonderful. This year is particularly magical because I am getting to experience the magic of the holidays through the eyes of my two year-old, granddaughter, Mackenzie.

Last week, we were especially lucky because we got to be a part of one of the biggest Christmas parades in southern New England—the Falmouth Christmas Parade.

I was so excited when I heard that the Cape Cod Children’s Museum had gotten together with Cape Cod Moms to enter a float in this parade. The design for the float used each organization’s trademarks—two whales sporting jingle bell antlers on their head represented Cape Cod Moms while the signature starfish of the Cape Cod Children’s Museum adorned the rest of the float. Five beautiful Christmas trees, courtesy of the Falmouth Rotary Club and purchased from Mahoney’s Garden Center were also a part of the float. After the float was dismantled, the trees would be donated to five nonprofit organizations: Cape Cod Center for Women, Heroes in Transition, Mashpee Senior Center, Falmouth Senior Center and one tree would be donated to a Mashpee family.

Everything was coming together so nicely and as President of the Board of Directors for the Cape Cod Children’s Museum, I was proud and excited to see this collaboration with Cape Cod Mom’s. All systems were set to go until the groups realized they needed transportation, (and by transportation I mean a truck with a tow), to pull the float in the parade. As the owner of a restoration company, we had a pick up truck large enough to pull the float. My husband Billy and I were thrilled to help out.

The day was absolutely beautiful—an unseasonably warm December day—and it was such a thrill to ride on the float and to witness the wonder of this experience with Mackenzie as she took in all of the sights, waving to the tens of thousands of people who lined the streets of Falmouth to see the parade. To say Falmouth takes pride in this tradition is a bit of an understatement.

I wished I could relive it all over again!

Flash forward a week— to Saturday night—and there I was again—with Mackenzie, this time riding along the route in Mashpee’s annual Christmas parade. Starting at the Mashpee Library and traveling through Mashpee Commons and onto Route 28, there we were, waving to the crowds that filled the streets on another unseasonably mild winter night. The parade started just after 5 p.m., and the floats were decorated with lights illuminating the dark December night.

I was so happy and lucky to participate in these two annual traditions and to have gotten to make these memories with my granddaughter—after all, that’s what the holidays are all about—making memories!